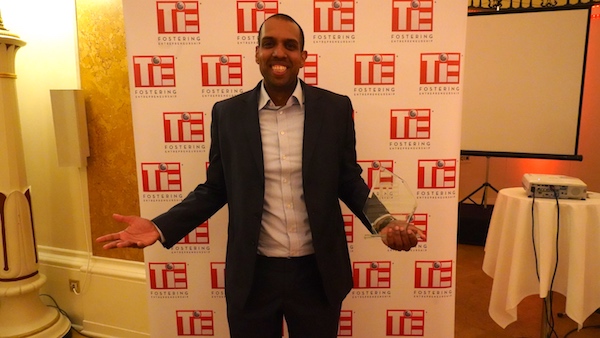 TiE London recently hosted its annual business start-up competition at Mayfair’s Landsdowne Club.
The competition put nine ambitious young leaders head to head in a Dragon’s Den style contest, pitching their businesses to a panel of judges for the chance to secure £50k of business funding, mentoring from the TiE London Board and a ticket to the European competition finals.

The competition is hugely popular and has become one of the highlights in the busy TiE London annual calendar. And with last year’s winners making it all the way to the TiE world final where they secured $700k of funding, the

quality and volume of entrants was marked. From more than 70 applicants, the competition’s judges, headed by Sid Narang, founder and CEO of theSqua.re and co-organiser of the competition, came up with the shortlist of nine businesses to live pitch to the panel at the London event.

The finalists varied enormously in terms of sector, business maturity and presentation style. Common threads though were the ambition, enthusiasm, drive and genuinely global outlooks of the entrants. There was a refreshing sense that they envisaged the whole world as their market place and had the
commitment to their businesses to make it so.

There were some probing questions on the presentations from the judges – as well as Sid, the panel comprised Rohit Krishnan, Dinesh Dhamija and Alex Verbitsky – in their quest to select just four businesses to pitch again in front of the wider TiE London business community. Any of the final four businesses shortlisted; financial services tech company WealthKernel, Aura Innovation, a company on a mission in the driver technology space, Highbrow, a provider of curated, appropriate and enriching
media content to children and on-line estate agent Doorsteps.co.uk would have been worthy winners.
Ultimately though, there could of course be only one. And this year’s TiE London start-up awards competition was won by WealthKernel following a compelling pitch by the company’s founder and CEO Karan Shanmugarajah.

Summarising the event, Sid Narang said “we are delighted to see twice as many startups participating in the second annual start up competition at TiE. This year also saw participation from many world class entrepreneurs including Dinesh Dhamija and Tony Harris, and Venture Capitalists from Fidelity’s Eight Road and WeWork’s Corporate team. We are really encouraged with the
momentum the event is gaining annually and look forward to mentoring, investing and supporting more European start ups from the 1st of January 2019 for our competition next year.”